We’re on to Year Three of our decade of stok memories to celebrate stok’s 10-year anniversary. This month, Katie Bachman shares the early years of her stok experience from Intro to LEED college courses to popping bottles over the tallest tower on the west coast.

I found out about stok as a senior in college when I took an Introduction to Green Building course as part of my Environmental Studies degree. Alex Spilger – Founder of GreenStep Education and one of Macko’s good friends – came in to teach an Introduction to LEED section and recommended that anyone interested in learning more about the industry volunteer at Greenbuild, which was in San Francisco that year. All the volunteer spaces were filled when I checked, but I looked at who was exhibiting and applied for any open internships at those companies. stok happened to be one of them.

I got an interview, got a coffee with Macko, and got the internship about an hour later. It wasn’t until later down the line when Alex Spilger visited our office that we made the connection between him, Macko, and myself and came full circle back to the very start of my industry interest.

What were some of your challenges during Year One?

I don’t know that I’d consider them “challenges” so much as “fun times”. We were so fly by the seat of your pants that everything was a challenge, but it was a welcomed feeling. It was never boring – even when my early intern tasks included cleaning out the fridge, Costco runs, constructing our Greenbuild booth, and walking Miley, Macko’s loving pitbull. I did throw out a bunch of Macko’s entrepreneurship awards during an office spring cleaning in my first month or so which pissed Macko off… We eventually got through it.

When it came to project work, our main challenge was the lack of standardization. I joined as the first Project Coordinator (or OG-PC, as I self-titled myself), before there was a process for anything like LEED documentation. Jake, Michael, and Warren were the only Project Managers at the time, and they all stored and named things by their own rules, so I was working with three PMs that needed the same things done in completely different ways. We realized that in order to scale, we needed to come up with PM processes for managing internal and external communications around our core service lines: LEED, Commissioning, and Energy Modeling. Finally having one person connecting the PMs helped bring cohesion to our process with the creation of documents like our LEED Action List, which allowed us to become more efficient and spend more time doing cool shit for our clients.

It was certainly a mix. We won Salesforce Tower – then called Transbay Tower – and popped champagne on the roof of our office. I also distinctly remember spending a full week counting all the lightbulbs for the Embarcadero Center LEED EBOM Certification. It was a lot of small Commercial Interiors, one-off LEED projects. Nothing portfolio based like the work I’m immersed in now – we weren’t there yet.

I was in the Commissioning department for a while despite having no MEP background simply because I was the only person available, but it allowed me to take off faster because I was able to learn this challenging part of building systems early, which was an advantage. Shai, our Director of Engineering, taught me how to use EnergyPro so I could help build the energy model for 535 Mission, San Francisco’s first LEED CS Platinum building. With a small but incredibly driven and creative team, the amount I learned in my first years was insane.

Definitely our industry connections. The industry was taking off right when stok was too, so there was a tight knit group of green building champions in the Bay Area and we were a part of that. Every project we worked on we made another friend, partner, ally. We continuously hire people that do a badass job and care about what they do, and I can’t name a client of stok who hasn’t enjoyed the experience and gotten what they wanted.

Macko’s ability to always see what’s next is also incredibly admirable. Every time we have a handle on what we’re trying to do and what we’re trying to accomplish, he’s already on to what’s next. I’ve just seen it again and again and again. I don’t think what we’ve been doing – the current state of service lines, teams, etc. – has ever been enough for him. His vision of greater impact continues to push us into something better.

And it’s obvious but can’t be ignored: the growing stress on our planet. Over the past half-decade that I’ve been at stok, the environmental crisis has escalated, and being able to provide solutions that are real and actionable is the ultimate driver behind our success.

Yes. It was never hard to see. Part of why working for stok is such a positive experience is that it’s really easy to see that it’s a successful organism. Even when we were seven people sharing one bathroom and sitting around a dining room table with our laptops “mounted” on stacks of construction management textbooks, the belief in our current state and potential was always clear. And when I think about our vision, what we could still become, I can imagine that too.

My answer is the same for both: the team has changed the most but has also remained the most the same. The everyday closeness with each one of my coworkers has naturally loosened as we’ve scaled from a team of 6 to 33 across multiple offices, but I still feel the same innate connection to everyone that first drew me to stok, a connection built off a shared desire to better our world – and have fun while doing it. This alignment in core values creates a trust that remains constant even as faces change. I know we will never lose that no matter the size of our team. 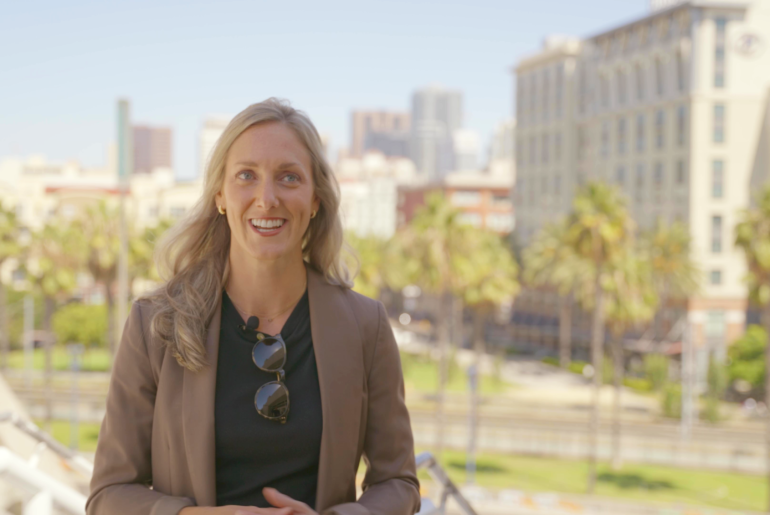