This Earth Month, we’re shining a light on corporate climate action. Tech companies are rising to the occasion and have made some considerable advancements in reaching their ambitious climate commitments. Here we highlight just a few exciting announcements from leaders in the tech space that give us hope for meeting the urgent need for climate action and carbon reduction in the private sector.

Apple is partnering with Goldman Sachs and Conservation International on natural solutions to climate change for financial and climate returns. This April, the companies jointly launched a $200 million Restore Fund that will make investments in forestry projects, with a goal of removing at least 1 million metric tons of CO2 from the atmosphere every year. These investments will not only accelerate carbon removal, but also generate financial gains for investors, demonstrating a financially viable model for climate action through forest restoration. This effort comes as part of Apple’s larger goal to become carbon neutral across its entire value chain by 2030. Learn more about Apple’s new initiative here.

Facebook announced that as of 2020, its operations are 100% supported by renewable energy. This means the company has reached net zero emissions and is one of the largest corporate buyers of renewable energy globally. In addition to the announcement, Facebook is sharing ways for individuals to get informed and act on climate change. Learn more about Facebook’s climate accomplishments and Earth Month resources here.

Google provided an update on their corporate goal to operate entirely on 24/7 carbon-free energy by 2030. So far, five Google data center sites in the US and Europe are operating at nearly 90% carbon-free energy. Within the next decade, Google intends for every one of their data centers, cloud regions, and office campuses to run on clean electricity 24/7. This status update follows other major milestones across Google’s portfolio, including being carbon neutral since 2007 and matching its operations with 100% renewable energy since 2017. Learn more about Google’s climate progress here.

HP announced some of the most aggressive and comprehensive goals in the tech industry this month to decarbonize their supply chain and scale circularity. The goals include achieving net zero GHG emissions across the HP value chain by 2040, reaching carbon neutrality and zero waste in HP operations by 2025, and reaching 75% circularity for products and packaging by 2030. These goals expand and accelerate HP’s corporate sustainability program. Learn more about HP’s climate goals and expanded partnerships here.

Salesforce launched the Salesforce Sustainability Cloud Scope 3 Hub, which helps companies streamline how they track their supply chain carbon footprint. Salesforce has used this tool to track and reduce its own Scope 3 emissions, and announced that its 1.5 degree Science Based Target includes a commitment that 250 of its top suppliers will set Science Based Targets of their own by 2024, and is already almost halfway to meeting it. Learn more about Salesforce’s commitment to Scope 3 emissions reductions here.

ServiceNow released its first Global Impact Report detailing the company’s ESG commitments and achievements to date. ServiceNow’s bold goals include achieving 100% renewable energy for its office and data center operations by the end of 2021, carbon neutrality for its office and data center operations and corporate travel by the end of 2021, and net zero carbon emissions across its entire value chain. The company is also focused on integrating equity into its ESG efforts, with a focus on diversity, inclusion, and belonging initiatives. Learn more about ServiceNow’s ambitious plan for accelerating decarbonization and advancing the circular economy here.

After a slew of corporate climate and carbon commitments in 2020, this is the action and reporting we need to see all companies follow through with. We’re continuously inspired by this leadership and here to help companies set, achieve, and report on climate goals across their portfolios. Reach out to talk to an expert about scaling sustainability for greater climate impact, and as always—really, it’s worth celebrating every day—happy Earth Day!

Food has made its way into the workplace. In an effort to attract and retain top talent, many companies have taken to the Silicon Valley trend of offering free or subsidized snacks and meals as 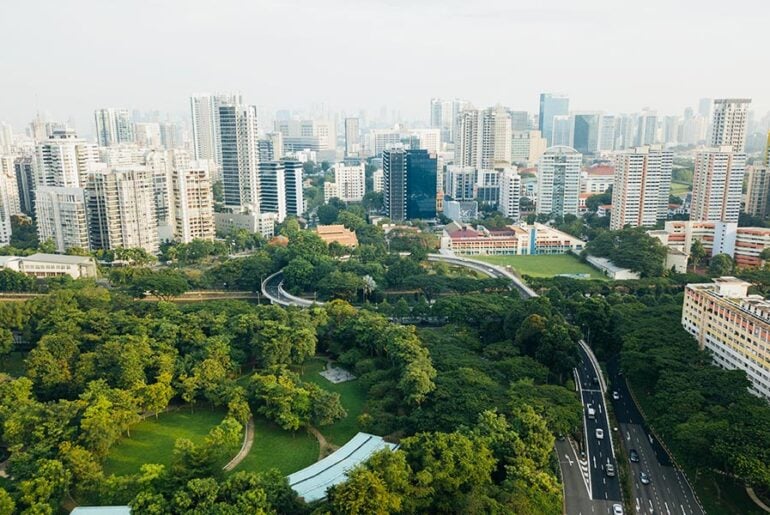 This June, stok partnered with Google and the International Living Future Institute to present on scaling sustainable real estate programs at Sustainable Brands ‘19 Detroit. As the business case for high performance buildings